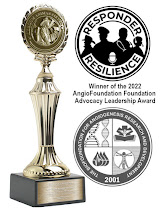 11/11/2021- The AngioFoundation (501c3) announced its official sponsorship of the RESPONDER RESILIENCE PODCAST.  This recent funding boost (alongside a lineup of new corporate and foundation sponsors) aimed at advancing the programming of the responder-media initiative's national footprint.
Since its inception in the fall of 2021, the podcast's popularity in the fire, law enforcement and other responder groups maintained a steady growth, continuing to bring in some of the most respected and recognized guests from the rescue service.  This steady rise in subscribers led the show to reach over 60 memorable episodes and a respectable set of subscribers in the public sector. In its 3rd season, Responder Resilience earned national recognition thanks in part to another AngioFoundation partner-- F.A.C.E.S. (Firefighters Against Cancer & Exposures). 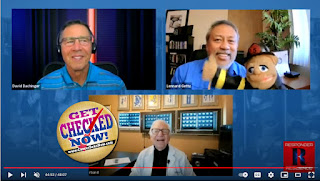 The alliance originally began in 2018 when the org's executive founder Dr. Robert L. Bard joined a medical collaboration with the 9/11 CancerScan -an early detection advocacy program for ground zero rescue responders.  Retired firefighter and cancer survivor Dave Dachinger was elected as a technical advisor of the project, spotlighting the health initiative called "Get Checked Now!".
On October 17, 2021, leading board members of the AngioFoundation spoke as guests on one of the early episodes of the Responder Resilience video podcast (Season 1, Episode 6) where Dr. Bard and executive director Dr. Lennard Gettz presented clinical reviews about the identified toxins and carcinogenic particulates from the many types of fire calls - otherwise called "BEING SALTY". They discussed clinical findings about today's "plastic fires", 9/11 illnesses, and they also covered a review on modern non-invasive diagnostics including image-guided biopsies and targeted therapies. This episode raised significant viewership in the fire service and earned new audiences within the cancer communities- thanks to the podcast's online re-distribution channels and social media boosting.

In Nov. 2021, F.A.C.E.S. and Responder Resilience teamed up on a special project broadcasting their November meeting of the NY Fire Bell Club at the NYC Fire Museum (See Video) which catapulted a major event in 5/2022 at the FDNY Fire Academy in Randall’s Island (NY). An official ceremony was held for the 699 first responders of the 1975 NY Telephone Exchange Fire (Feb. 27, 1975) with the Memorial Wall and Plaque Dedication Ceremony. Dr. Bard took the podium as an honoring speaker and presented the highest foundation award to advocate and survivor Ret. FF. Dan J. Noonan.
As a public educational service, Mr. Dachinger attracted fundamental supporters and program partners including podcast co-hosts clinical psychologist Dr. Stacy Raymond and licensed social worker Bonnie Rumilly. AngioFoundation program executive and F.A.C.E.S. director Dr. Gettz also joined the efforts to support the podcast's branding, distribution and outreach development.  "Now more than ever, streamlining our public media with sound educational content and dedicated awareness is paramount.  Using the benefits of the web to bring front-row access to the insight of our local heroes is empowerment for us all… on so many levels.  Lessons learned from  active members of the rescue service carries great value when it comes to uniting our community," states Dr. Bard.

THE ANGIOFOUNDATION was established in 2001 as public trust in support of medical research and educational programs relating to noninvasive cancer diagnostic solutions. Over the years, the foundation championed public advocacy efforts through new alliances with public health initiatives like the FIRST RESPONDERS CANCER RESOURCE, BRAIN INJURY DETECTION, THE PAIN HEALERS COALITION and the WOMEN'S DIAGNOSTIC NETWORK. The AngioFoundation's sponsorship is a national endorsement of the podcast within the medical community. The attention gained from this is expected to bring in new support from other supporters of rescuers' health and safety groups as well as other foundations who encourage prevention and early detection.

11/11/2021- The AngioFoundation (501c3) announced its official sponsorship of the RESPONDER RESILIENCE PODCAST .  This recent funding boost ...