THE ANNUAL “ARE YOU DENSE?”MUSICFEST IS BACK

- WITH NEW MUSICAL MUSCLE AND CANCER CLINICAL PARTNERS TOO! 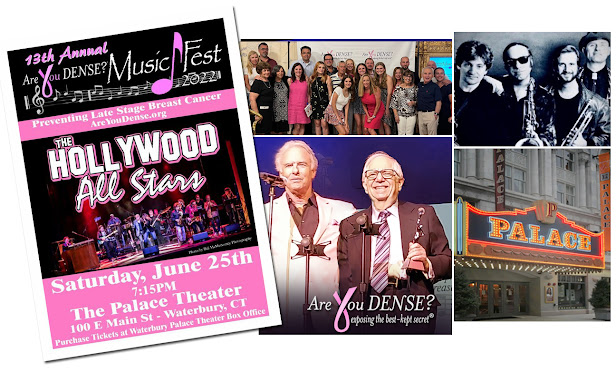 June 25, 2022- Joe Cappello, Executive Director of the ‘Are You Dense?’ Foundation 'brought down the house' at the famous Palace Theater in Waterbury, CT once again.  The 2022 Music Fest is about the gift of music, laughter, togetherness and supportive awareness about the awareness of cancer-related breast density health issues.

This longstanding entertainment tradition spans over a decade of connective magic to an ever growing national community of supporters of the "Are You Dense?" mission. This year's headliner was the Funk super-group “The Hollywood All Stars” led by former Epic/CBS Recording Artist and Grammy nominated songwriter & producer Steve Gaspár  - bringing back the "No Compromises" Funkin' big sound of Live Horns & Hammond Organ.

7:15pm.  The long awaited MusicFest kicks off its spirited night of laughs, music and the tradition of gaining community awareness about the breast density crisis.  The driving message of awareness was architected by the matriarch of the foundation, Nancy Cappello, who passed away from treatment complications due to a missed diagnosis due to breast density.

Prior to the Covid-19 pandemic, this annual fundraising celebration has been a constant ‘must-see’ for music and comedy fans far and near, attracting droves of loyal fans and new followers to the nationally recognized flagship theater. This year's exemplary response in ticket sales were a reflection of the lifting health mandates, where families and friends are ready to enjoy a night on Main Street once again. Cappello and his board found 2022 to be the right year to finally "get back to the Palace... and get back to business".

Mr. Cappello took the pandemic-related hiatus from the Palace theater as a means of reorganizing and eventual empowerment.  "It gave us a chance to look at all sides of our mission and to touch on areas that better supported our objectives... this also meant bringing in new resources and friends that could add new dimension to our goals!" - said Mr. Cappello. An expanded list of prominent sponsors were also excited to get back to public support, including PHILIPS, FUJI FILM, DELPHINUS MEDICAL TECHNOLOGIES and the HAROLD LEEVER REGIONAL CANCER CENTER. 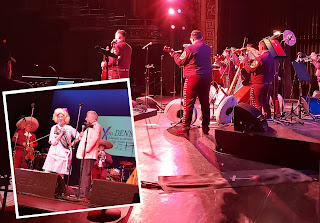 As a fundraising event for advocacy, research and education, “Are You Dense?” collected over $18K from ticket sales, raffles and sponsorships- a significant boost from prior years.   This year’s special event also joined with many new allies, advocacy groups and community leaders to further elevate the outreach efforts of the Are You Dense? message.  One of the top award recipients celebrated in this special night was Sandy Cassanelli, recipient of the ESTHER AWARD, for making a significant and enduring impact on others.  In 2015, Ms. Cassanelli was diagnosed with stage 4 metastatic Breast Cancer. She launched the Breast Friends Fund (MFF) to fundraise and donate 100% of the money raised to Metastatic Breast Cancer Research. Kevin Kniery, CEO of The Harold Leever Cancer Center in Waterbury, Ct. received an award for the organization.” The Cancer Center has consistently supported Are You Dense, Inc from the very beginning in many ways and owe them a debt of gratitude”, said Cappello.

The final honors was dedicated to Dr. Robert L. Bard, internationally recognized cancer diagnostic imaging expert from NYC.  He received the "CHAMPION OF EXPOSING THE SECRET" award for his clinical and research work in doppler ultrasound technology to offer a supplemental solution to dense breast scanning over mammography.  Dr. Bard partnered with Mr. Cappello in 2021 to run a 3-day dense breast community scan at the Bard Cancer Imaging Center.  They continued their common mission to co-support a pilot study of dense breast screening in underserved communities. “Nearly half of all women age 40 and older who get mammograms are found to have dense breasts. Breast density is often inherited, but other factors can influence it. Factors associated with lower breast density include increasing age, having children, and using tamoxifen. Women with dense breasts have a higher risk of breast cancer than women with fatty breasts, and the risk increases with increasing breast density. This increased risk is separate from the effect of dense breasts on the ability to read a mammogram”, states Dr. Bard.

Are You Dense, inc.  is a non-profit 501(c3) foundation dedicated to educating the public on the impact of dense breast tissue on missed, delayed, and later stage breast cancer, in hopes to increase survival of the disease.

MOMS ON A MISSION (PART 2): "FOCUS ON OUR YOUNG ATHLETES" 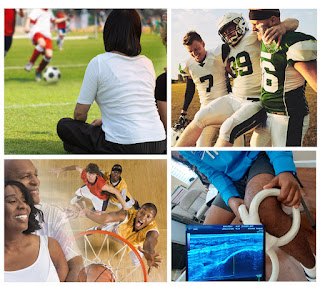 In support of our young future All-Stars, we need to give them all the best clinical care and preventive science has to offer- to keep them safe and in top healthy shape. Under a collaborative partnership between The Angiofoundation, the Integrative Pain Healers Alliance, The Women’s Diagnostic Network and Moms on a Mission comes a unique advocacy and research initiative to bring access to the top innovations in diagnostic and therapeutic care for our young athletes.
ONE VOICE FOR PUBLIC CARE
The MOMS OF ATHLETES project is a coalition of parents and caregivers that offers a national roundtable collaboration about the current state of contact sports and how our children are directly affected.  Through our web-based EmPowermeet Conferences, we can now unite to form open discussions about the most critical topics and explore solutions collectively.

NON-INVASIVE MOVEMENT
Our alliance of professionals and moms are dedicated to finding the safest options in injury and pain care.  This includes the modern non-invasive (non-surgical) alternatives where possible.  NCMOA also teams up with the professional pain and medical associations to collaborate on latest protocols and information on ground-breaking neurostimulation, electromagnetic, holistic/full-body solutions and wearable therapeutics plus the latest in non-radiation clinical imaging validation.
DILIGENT RESEARCH BY A SPORTS-MOMBy Donna Febres, Ph.D

Pain is something that I'm learning as a parent, that many athletes will just be living through. Some undergo chronic pain and others deal with acute pain as well.  I speak to many professional athletes and their families about living with injuries and I had to come to grips with the fact that my son who loves contact sports was going to somehow, some way will get injured.  That’s just the nature of the sports he plays.  From the sidelines (in recovery), I can see them reflect on the many kinds of measures available to get back on their feet, or at the very least- get some relief.  For my son, I found myself doing deep research on the latest protocols and any new modalities. I was completely amazed by this electromagnetic field science for the opportunity to bring recovery non-invasively.  Having further discussed this technology with one of the top orthopedic surgeons was the reassurance I needed that managing my son’s injury was in very safe hands!  Thanks to Dr. Bard’s process, I watched my son get back on the field after one treatment, and having the means of monitoring the injury in progress- is absolutely remarkable science. 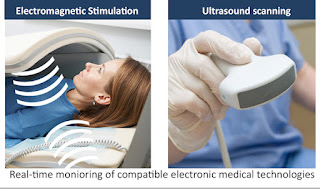 SYNCHRONIZED IMAGING OF TREATMENT PROGRESS
One program for athletic pain and injuries is designed by Dr. Robert Bard (clinical diagnostician) aligning with with physiatrists from the realm of functional medicine to explore and refine what he aims to propose to be the next stage of evolution for imaging. “Combining the functions of real-time monitoring of ultrasound with these regenerative stimulators, we are able to see their immediate effects on the body.  With enough stress testing, we have proven that we have 100% compatibility (and no signal disruption) between the ultrasound probes while scanning the areas under electronic treatment- or vice-versa.  This is great news because our tests are of the body’s biometric response on a micro level- and these treatment devices all have some complex magnetic signals and emitters that may conflict with sound waves”, states Dr. Bard. (SEE complete review)
On a separate interview, NFL Alumni Director of Wellness Challenge Mr. Russ Allen applauds Dr. Bard’s research initiative for athletic injuries and the use of non-invasive intervention to get players back on the field.  “I have been a major fan of this PEMF technology for over a decade”, said Mr. Allen. “Someday, I hope to see the thought of drugs, shots and surgery in the past tense. So much about conventional medicine (and sports medicine) need an upgrade… especially when we have so many of these innovations that clearly show proven and sustainable results.  Dr. Bard is definitely on the right side of science by validating through imaging and encouraging non-invasive care, where seeing is believing.”

THE ANNUAL “ARE YOU DENSE?”MUSICFEST IS BACK

- WITH NEW MUSICAL MUSCLE AND CANCER CLINICAL PARTNERS TOO! June 25, 2022- Joe Cappello, Executive Director of the ‘Are You Dense?’ Foundati...